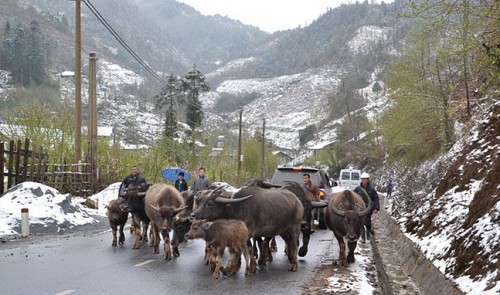 Affected by a cold snap that is moving south, Sa Pa District in the northern province of Lao Cai has been experiencing very cold weather, with a temperature of 9 degrees Celsius recorded Wednesday morning.

>> Snow falls in Sa Pa again>> Sa Pa shivers in heavy snowfall Locals in high-altitude areas in the district have evacuated most of their livestock to lower elevations to avoid the damaging cold weather, local authorities said. Luu Minh Hai, director of the National Center for Hydro-Meteorological Forecasting, said the temperature was the lowest recorded so far since the beginning of winter in Sa Pa. However, Sa Pa has experienced much colder weather before. On February 19 it snowed in the area and the temperature was zero. Many other localities also suffered from the cold yesterday. At 7 am on Wednesday, Mau Son Mountain in northern Lang Son saw an even lower temperature than in Sa Pa, 8.2 degrees, while Sin Ho (Lai Chau province) and the Pha Din pass (Son La province) – both in the northern region – saw higher temperatures at 11 degrees. In Hanoi, the lowest temperature on Wednesday was recorded at 15.8 degrees at Ba Vi Mountain. At 9 am this morning, Hanoians enjoyed warmer weather, with a temperature of 18 degrees. The center also forecast that similar cold weather will hit the northern delta region within the first half of December. This will be the first cold spell, during the period between winter 2014 and spring 2015, and will arrive sooner than in previous years. From now to the end of this year, three or four tropical storms or depressions will appear in the East Sea, and one or two of them will directly affect Vietnam’s coastal areas, the center said.