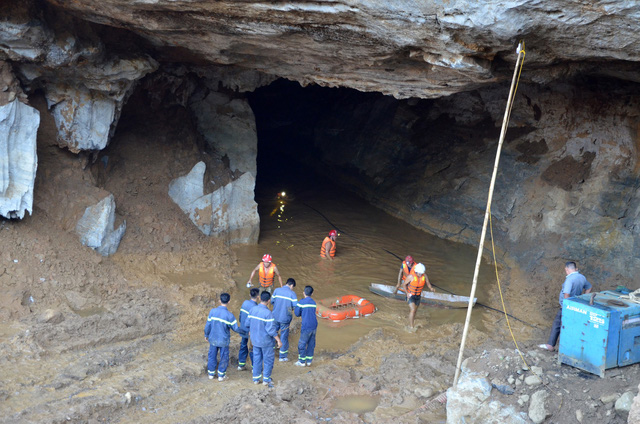 Bach Xuan Hung is being detained on charges of unlawful gold exploration and extraction and may receive more counts if legal proceedings are launched against him, law enforcement said at a press conference on Monday.

Hung had been hiring employees to prospect for gold without a license at a mountainside mining cave in a remote area in the northern province of Hoa Binh, around 70 kilometers southwest of Hanoi.

At around 2:00 am on Sunday, two of Hung’s workers got carried away about 100 meters further into the cave, while they were operating machines inside it, local authorities said.

This happened as the embankment built at the cave entrance to prevent flooding had burst.

The muddy mine had the floor submerged by water seven meters deep at the time rescue workers arrived on Sunday morning.

Rescuers used water pumpers and excavators at the scene and managed to drain the water after multiple hours.

Bamboos have been tied together as a platform over deep wet mud to the stranded workers.

The workers were identified, but they remained unaccounted for as of Tuesday morning.

Officials said after the victims were swept away, Hung and many other workers removed some mining machinery and buried other machines in the cave to destroy evidence of the illicit activity before reporting the incident to police officers.

Hung has been booked on multiple occasions for his unlicensed gold mining in Hoa Binh during the past two years, official said at Monday’s press meeting.

He always had the mining activity carried out at night and ordered his people to stand around the site, ready to give warnings of regulators’ presence.