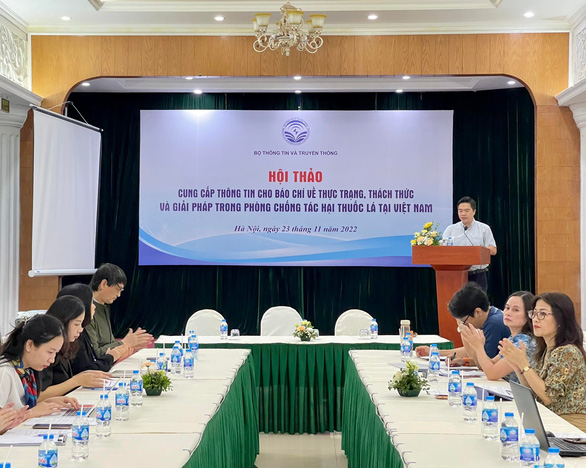 Vietnam now ranks 15th in smoking prevalence in the world and Vietnamese smokers are estimated to spend a total of nearly US$2 billion on cigarettes each year, according to the Ministry of Information and Communications.

Deputy director of the ministry’s Department of Legal Affairs Ho Hong Hai released the figures at a seminar held in Hanoi on Wednesday to discuss the current smoking situation in Vietnam as well as challenges and solutions to the prevention of the harmful effects of tobacco.

The rate of tobacco use in Vietnam remains high, especially among men, despite a series of measures that have been implemented over the past several years to lower smoking prevalence in the country, including an increase in national tobacco tax; mandatory health warnings on cigarette packs; the establishment of smoking-free areas; and a ban on tobacco advertising, promotion, and sponsorship.

With about 15.6 million smokers, Vietnam now ranks 15th in the world in smoking prevalence. The total expenditure on cigarettes by Vietnamese amounts to VND49 trillion ($1.98 billion) per year, Hai said.

Around 40,000 Vietnamese people die each year from tobacco-related diseases, and this number is expected to rise to 70,000 by 2030 if Vietnam fails to effectively prevent tobacco use, warned the national tobacco harm prevention and control program.

This annual death toll is nearly four times the number of fatalities from road traffic accidents each year.

The number of Vietnamese people dying from tobacco use last year exceeded the total number of deaths from HIV/AIDS, tuberculosis, traffic accidents, and suicide.

Reports at the seminar noted that access to tobacco products is easy as cigarettes are sold everywhere, and the special income tax rate for tobacco in Vietnam is the lowest in the ASEAN region.

According to the World Health Organization (WHO), smoking is one of the main causes of non-communicable diseases such as cancer, high blood pressure, stroke, and heart disease.

Cigarette smoke contains more than 7,000 chemical components, including 69 carcinogens, and it is the cause of 25 diseases, including cancer, cardiovascular, respiratory and reproductive diseases, among others, said Nguyen Thi Thu Huong, an expert from the Ministry of Health’s Tobacco Harm Prevention Fund.

Nicotine in cigarette smoke is a substance classified by the U.S. Food and Drug Administration as having pharmacologically addictive properties similar to heroin and cocaine, Huong said.

Smoking prevalence among men in Vietnam has trended downward recently while the opposite is true for women, the official said.

In addition, the rate of new smokers among young people has increased sharply over the past five years, from 0.2 percent in 2015 to 3.6 percent in 2020, or an 18-fold increase, with the increase rates of men and women being 14 and 10 times, respectively.

Dr. Angela Pratt, WHO representative in Vietnam, commented that cigarette prices in the Southeast Asian nation are incredibly cheap.

Current prices of cigarettes in Vietnam fail to serve as a barrier to young people in accessing tobacco, so hiking the tobacco tax will be the fastest and most cost-effective way to curb smoking prevalence, Pratt said.

The ministry has banned all of these new items, which are typically brought into Vietnam through smuggling and as hand-carried goods, among other ways, Trang said.

Such products have been widely advertised on the Internet and social networks to make them easy to be accessed by consumers, she warned.

Meanwhile, the Law on Prevention of Tobacco Harms has yet to adopt any regulations governing NGTPs, the official added.