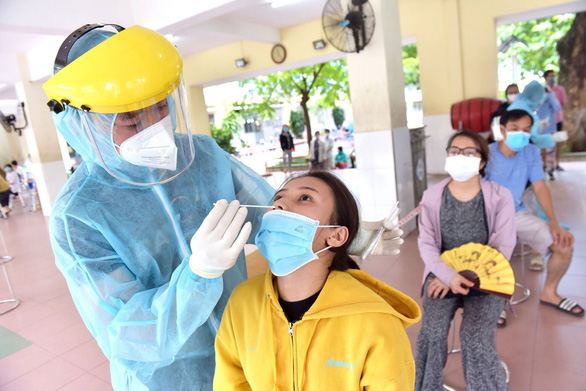 As an effort to curb the coronavirus spread, Vietnam’s economic hub of Ho Chi Minh City has decided to maintain its own epidemic control measures after the social distancing period under a prime ministerial directive has expired.

The decision was announced by deputy chairman of the municipal People’s Committee Duong Anh Duc at a press conference held on Monday afternoon, focusing on epidemic control measures.

This decision came as the city has recently topped the country in daily new COVID-19 infections, with more than 100 cases added every day from many new clusters.

“There is no date of expiry for the social distancing period under Directive 10, so the city will continue to apply it from June 29,” vice-chairman Duc said.

Directive 10, which started to be enacted by the municipal administration on June 19, requires suspension of non-essential businesses and unofficial markets, public gatherings of no more than three people, and a minimum distance of 1.5 meters between people in public.

Residents are required to stay home and only go outside to buy food and supplies, seek emergency treatment, or go to work.

On May 31, Ho Chi Minh City began implementing social distancing measures under Directive 15 within 15 days for the entire city, except for Go Vap District and Thanh Loc Ward of District 12, where the stricter prime ministerial Directive 16 was applied.

On June 14, as the epidemic situation remained complicated, chairman of the municipal People’s Committee Nguyen Thanh Phong decided to continue applying Directive 15 for the whole city for an additional two weeks, from June 15 to June 29.

Currently, the city is accelerating its mass COVID-19 vaccination drive which started on June 19 using 836,000 AstraZeneca vaccine doses donated by the Japanese government.

As of 6:00 pm on Sunday, nearly 711,000 residents had been vaccinated against COVID-19, local authorities reported on Monday.

In a report issued on Tuesday afternoon, the Ministry of Health confirmed 102 new COVID-19 cases, including 94 domestic and eight imported infections, of which 54 were logged in Ho Chi Minh City.

The total number of coronavirus patients across the country has amounted to 16,238, including 6,519 recoveries and 78 deaths, since early 2020.

Since the pandemic’s fourth wave that appeared in Vietnam on April 27, the nation has documented 12,882 infections, the ministry said.